We are excited to announce that Muskeg Excursions is now owned and Operated by  Northern Professional Outfitting & Guide Service!  Providing premier boat based hunting and fishing adventures in Southeast Alaska and remote wilderness hunting in the Brooks Range of Alaska!  If you would like to proceed directly to the new website, click here: https://www.northernproguides.com

Don’t forget to go to my Hunt Reports link for lots of picture pages of Sitka Blacktail deer hunts .. 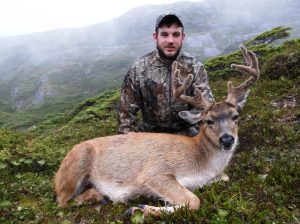 Alaska’s deer season opens in August when most Sitka black-tailed deer are in the velvet and have their red summer coats. The deer are still in bachelor groups in the upper alpine areas on Prince of Wales Island.

We hunt from remote backpack spike camps. This is a physically demanding hunt but the payoff is often good weather, lots of deer and a good chance for a record book buck. It’s not uncommon to spot groups of 10 to 15 animals, mostly bucks. August days are long in Alaska.

During early September through early October I conduct combination Sitka black-tail / black bear or single species hunts. Their hair can be in the transition stage between summer and winter during these hunts. The deer have shed their velvet and have started their pre-rut tendencies. We continue to hunt them out of alpine spike camps. The days have begun to shorten up and rain, fog and wind is on the increase. A P&Y or B&C scoring buck is always possible in my hunting areas. The genetics and minerals are there. 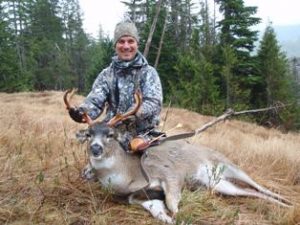 We hunt the bucks in the mountains, muskegs and on the beaches depending on the weather and snow level. The bucks readily come into the call in Southeast Alaska starting in late October.

In the 1996 rut hunt, I called in and took a rare non- typical deer that, at the time, ranked #2 in the Safari Club International listings. Another of my trophy deer took first award in the Boone & Crockett 21st Big Game Awards and you can read my story in that publication. This is my favorite North American big game hunt and Sitka black-tailed deer hunts are a Muskeg Excursions specialty….and we have seen some excellent success.

Does this sound good? If this is the Sitka Blacktail hunt your looking for please give me a call, drop me an email.

I’d be happy to talk with you about the possibilities!